The world of gaming laptops can be daunting, with countless options and a wide range of prices. If you’re on a budget, finding a laptop that can handle your favorite games without breaking the bank can be incredibly challenging. That’s why we’ve put together this list of the best gaming laptops under $1000.

Choosing The Best Gaming Laptops Under $1000 (our top picks)

These laptops offer an outstanding balance between performance and affordability, with powerful processors and graphics cards that can handle demanding games and plenty of storage and memory for all your files and programs. They also come in various sizes and styles so that you can choose the best fit for your needs and preferences.

Whether you’re a casual gamer who wants to play the latest titles or a hardcore enthusiast who needs the latest and greatest hardware, you’ll find something to love on this list. So without further ado, here are the top gaming laptops under $1000.

A gaming laptop with a $1000 price tag will likely have a decent processor and graphics card, allowing it to run most games at medium to high settings.

But this is not all bad because Laptops don’t require a very high-resolution display in the first place. An LED Display is more than enough for most tasks, primarily gaming. Unless you’re doing some work that requires color correction and stays accurate to the colors, you’re good with the displays on this list.

As for the processing power, the laptops under $1000 come with decent CPUs. You can expect the Ryzen 7 5800 has the top processor on this list and the RTX 3060 or the 3050 as the top-tier GPU in this segment.

The RAM for most laptops will be 8GB, unfortunately, as most manufacturers sell 8GB in the base variants, but you can always upgrade them.

And last but not least, the storage. It would help if you didn’t buy any laptop with a physical hard drive, SSDs are a norm in the industry, and 512 GB SSD is the standard.

The Best Gaming Laptops Under $1000

We’ve taken all these parameters to heart when searching for the best laptops in this segment, and here’s the list.

The laptop that’s next on the list is probably the best in price, but it is slightly higher than $1000, so it went down on the ranking. But you can get this laptop for around $1000 in sales; as of writing this blog post, the computer is being sold for $899!

The Legion 5 is a gaming laptop, and it shows in its design. It is a very bulky, dark-colored laptop with a well-built chassis and many ports!

As for the processor, it comes loaded with an AMD Ryzen 7 5800H and NVIDIA GeForce RTX 3050Ti graphics. The base variant is sold with 16GB RAM, so you won’t have to upgrade immediately, as we asked for the other laptops. But, if you want, you can go for 32GB as well.

The combination the legion is providing at the price point is insane, you can run any game without any issues, and when we say any game, we mean it!

This DELL Laptop is a clear winner here; its specs at the price point are unrivaled. This price point might fluctuate at the time you read this blog post. But, it coming down to $800 indicates that it will drop again sometime in a future sale, so keep an eye out for when that happens.

The laptop itself is good; there’s a reason why we have put it on the number 1 post on this list. With an AMD Ryzen 7 5800H Processor and NVIDIA GeForce RTX 3050 Ti, this laptop can efficiently run any AAA title that is out right now.

The RAM on this laptop was the only letdown, as it is only 8GB, which should’ve been at least 16GB if you could enjoy every game without any lag spikes. They give you the option to upgrade the RAM if and when you get the cash, so we recommend you upgrade to 16GB as soon as you buy it to get the most out of the hardware.

The Laptop’s build quality is top tier; it is so good that many competitors copied the design and the aesthetic the Dell G15 created. The Acer Nitro and Lenovo Ideapad Gaming were all inspired by the G15s design.

The Laptop comes with a 120Hz FHD LED display, which is standard in such laptops, so the laptops are spot on even in the Display category.

This is the best Gaming Laptop under $1000 that you can buy right now!

Next up on the list is the ROX Strix G15, a laptop that deserves the gaming tag it gets because it looks very much like a gaming laptop. The ROG Strix G15 is built for gamers, and the design screams gaming from every angle. With sharp edges, vents across the Laptop chassis, and the RGB led at the front of the laptop make it the best-looking machine on this list.

Well, let’s not get carried away with the beauty of it because the specs matter more.

Fortunately, the ROG Strix doesn’t disappoint in specs. It comes loaded with a Ryzen 7 4800H and NVIDIA GeForce RTX 3050, and not just any 3050, the 95 WATT TGP Variant, which is the best RTX 3050 variant; it doesn’t get any better than this.

The laptop also features a 512GB SSD, which will be more than rough even if you store multiple games on your computer. But as with the first entry, the Asus laptop also comes with 8GB RAM, which you will have to upgrade to 16GB to get the best performance manually.

Overall, it’s a pretty decent laptop and can run every game you want.

The MSI GF65 Thin is a budget gaming monstrosity; it comes from the lineup of affordable MSI laptops.

It is the only laptop on this list that comes with an RTX 3060, and of course, it is a bit on the expensive side; in fact, it does surpass the $1000 mark, but when you go for it during a sale and use coupon, plus the additional discount you get on a credit card, you will easily be able to buy this under $1000.

At that price, this laptop is a steal. The intel i7 makes quick work of any task you throw at it, and in conjunction with the powerful 3060, you’d be able to run any triple-A title. Although it comes with only 8GB RAM, you can always upgrade it down the line to get the most optimal gameplay.

The laptop’s look is also very subtle, so this is a good pick for those who don’t like the edgy gaming design.

The laptop chassis is well-built, and the keyboard has almost no flex. The screen does wobble a little, but that much is expected from such a big display.

This MSI laptop is a beast and can easily be higher. So don’t hesitate when going for it because different people love different manufacturers. For example, the Asus gaming laptops come with Armory Crate, a software that allows them to control the RGB lighting.

Next up on the list is the Acer Nitro 5, a laptop that has made it to the top spots of many lists across the internet, and there’s a good reason for that. With an aggressive pricing of $749 and even lower during sales, the Acer Nitro 5 blows the competition out of the park every time.

With an Intel Core i5-10300H and NVIDIA GeForce RTX 3050, you can expect to run every game with decent graphical quality. It won’t give you the same level of performance as the first two entries. Still, not everyone is a graphic geek, so if you can compromise on some graphical quality, you can save up to $200 on this one!

And it’s not like the Acer Nitro 5 is wrong; the opposite is true. Acer has managed to create a lovely package for its price. You can do all your regular tasks, run any software, and open as many chrome tabs as you want without worrying about a thing!

You get 8GB RAM out of the box, which, once again, you have to upgrade to, but it’s not a big deal as the laptop itself isn’t very expensive. You might also want to increase the SSD as it only gets a 256HGB stick.

With a 144Hz display, the Acer Nitro makes for a great overall package if you want to save money.

The HP Vitcus is a gaming laptop built for students on a budget, costing less than $800 across the globe. There are various variants of the Victus because of its popularity. But, the one we have here is the base variant with a 12th Gen Intel Core i5-12450H and an RTX 1650 50 WATT, which can provide a decent light gaming experience.

You can easily sail through your daily office/school tasks and get to the game in breaks.

You can’t expect to run the latest triple-A titles at max settings, but you can run them at lower settings and enjoy them as intended. This is handy if you’re not a graphic geek. Not only are you getting all the features of a gaming laptop, but you’re also paying less for it.

The Lenovo Ideapad Gaming is a laptop created for those who couldn’t afford the Legion series. You can get this laptop for as low as $599.

But even with such an aggressive price point, the laptop comes with hardware that will blow your mind. The processor used in the computer is the Ryzen 5 6600H, along with an RTX 3050 graphics card, so you get a dedicated graphics card to an RTX 3050!

With such monstrous specs at such a low price, you can easily play triple-A titles without emptying your bank account. Games like Vlaorant and CS GO even reach 90-100 FPS when played with recommended settings.

This is the perfect fit if you don’t care about graphics. You can do all your regular daily tasks and some gaming on the side.

But this laptop also has a downside: the display isn’t the best. So if you’re working in an industry requiring color accuracy, this is a no-go; instead, opt for laptops with better screens, like the ones you have higher on our list.

But suppose you’re only using it for gaming and everyday use; the display is more than enough because you don’t require a 4k display to enjoy gaming on the laptop as you’re sitting very near the screen, so even if you get a 4k display, you won’t feel a big difference. 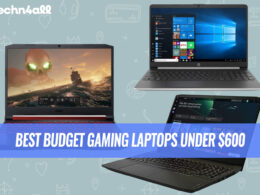 If you were searching for a new gaming laptop under $600 a few years ago, people would’ve made…
byMohammad Junaid 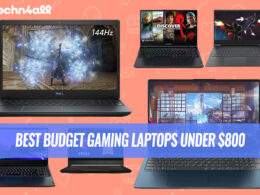 Computer hardware prices are decreasing as the global chip shortage stabilizes and Crypto GPU mining ends. This is…
byMohammad Junaid 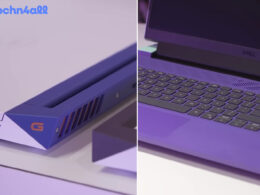 Dell unveiled a new line of G-Series laptops at the CES 2023 event. These new models are considered…
byTechn4all 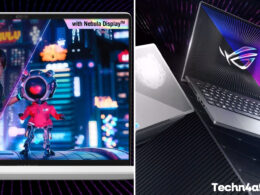 Regarding gaming laptops, ASUS is a brand that often comes on top of the list. In particular, the…
byTechn4all